In 2016-2017, the Amber Room was sought in Mamerki. Global and nationwide media carried out rerelations live from search. Mamerki became famous.
From May 2018 in Mamerki, you can visit a replica of the Amber Room room – 60 m2 of exhibition. Replica was made with great accuracy by a renowned art studio specializing in the reconstruction of the missing world art works.
15,000,000 Poles learned about Mamerki and followed the search for Amber Room in 2016.

Amber chamber – the eighth wonder of the world 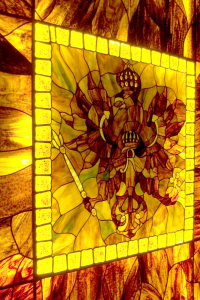 Amber hall with dimensions of 10.5m x 11.5m, was created at the beginning of the 18th century on the initiative of Fryderyk I Hohenzollern. She was to decorate his office at the Charlottenburg palace in Berlin. The creator of the artistic idea of ​​the amber room is believed to be Gdańsk, architect Andrzej Schluster.
In 1716 Tsar of Russia, Peter the Great during his visit to Potsdam, delighted with the masterpiece, he received it in a gift from Frederick William I (son of Fryderyk) as a proof of friendship and confirmation of the alliance. Dar went to St. Petersburg. The Amber Room was exhibited in the Summer Palace, then in Winter Palace, until it finally came to Tsarskoye Selo in 1755 by the order of the Czarist Elżbieta I. There, it was expanded and enriched. In 1941, the palace was looted by the Germans. The Amber Chamber was sent to the castle in Królewiec. On April 9, 1945, the Red Army captured the fortress of Krolewiec, but the treasury was never found.
The search for the Amber Room continues to this day. Currently, its value is estimated at USD 0.5 billion. Where can it be located? In the Sowie Mountains, the dungeons of the Książ castle, somewhere in Germany, or maybe in Mamerki? We know from the accounts of the local residents that Erich Koch, a former gauleiter of East Prussia, was transported from the prison in Barczewo to Mamerek, where he indicated the place of concealment of the treasury. Polish sappers unsuccessfully blew up the foundation of the bunker No. 31 to get to the hiding place indicated by Koch. The treasure has never been found.