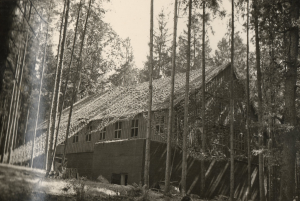 In Mazurian Lake District, on Mazurian Canal, 8 km from Węgorzewo, 22 km from Giżycko, 25 km from Kętrzyn, 18 km from Gierłoż, there is a complex of undamaged Nazi shelters, one of the best-preserved in Poland. In 1940-1944 buildings and concrete shelters were constructed for forty highest generals and field marshals, 1500 officers and Wehrmacht soldiers; 250 buildings, including 30 shelters, remained undamaged. Nazis did not have time to blow up shelters, they were left without fight by Wehrmacht forces in January 1945.

When the attack started, the commander of the land forces – the field marshal Walter Brauchitsch, and the chief general Franz Halder with a group of forty highest-ranked Wehrmacht generals arrived at Mamerki. Among them, field marshal Friedrich Paulus, who personally developed the plan of attack on the Soviet Union code-named Barbarossa. Later, as the general of the 6th army fighting at Stalingrad was encircled by the Red Army and taken prisoner together with 180 000 soldiers, thousands of tanks and cannons.

Gen. Heinz Guderian also stayed in Mamerki as the chief of staff, he was the creator of Nazi armor, whose tanks arrived at Moscow. In the headquarters, the heads of military intelligence worked, among them gen. Liss engaged in espionage of the western armies, and also gen. Gehlen, who obtained information on the Red Army, after the war he created a network of intelligence working for Americans. Here, for the first time, gen. Erwin Rommel, the famous “desert fox” met the renowned strategist gen. Erich Manstein. In August 1941, Hitler and Mussolini visited Mamerki.

In the headquarters, Finish, Hungarian, and Japanese military attaches stationed. In 1941-1942 the place was visited by Miclos Horthy, a Hungarian dictator, Jon Antonescu, Romanian head of state, Carl Mannerheim, Finish field marshal and the commander in the wars with the USSR in 1939-40 and 1941-1944.

On the headquarters premises, from June 1941 to February 1943, colonel Claus Stauffenberg ran preparations to overthrow the authority of Hitler. In the silence of Mamerki forest he conducted secret talks and recruited other conspirators. It was here, where the explosives for the assassination and secret documents concerning the takeover of power, were stored. As one of the conspirators, Capt. Hans von Herwarth, recalled : “In the spring of 1944 Capt. Kuhn and lieutenant Hagen dug a pit in Mamerki woods, not far from the barrack of the Organizational Department, and buried explosives, and a bit farther confidential documents containing orders on the day of Hitler overthrow. With the dogs help the secret police found explosives, luckily they did not found our confidential orders”.

In 1941-44, Mamerki was a self-sufficient town protected by a mechanized guard battalion. The whole object was surrounded by a barbed wire fence. Every 300 m there were concrete poles (preserved to this day) with telephones and lanterns illuminating the area. Four guardhouses secured the safety and anti-aircraft canons defended against air attacks. Apart from shelters, scores of barracks were built, where staff officers, communication services worked, there were kitchens, a casino, a post office, a cinema, living quarters, a hospital, a sauna, and stables. Shelters, depending on the type, consist of two or five rooms, they are equipped with two or four shooting ranges locked from the inside. They have ventilation systems, traces remaining after air filters, electrical and telephone installations, central heating and toilets. Both entrances from the corridor were equipped with reinforced and gas-tight doors. Masking the outer walls with sea grass hardened with concrete and special moss protected shelters against detection from the air, it was so effective that even today, after seventy years, they blend into the background of the forest. The intake from Mamry lake delivered water to the pumping station and water treatment plant (7). The electric current was supplied from the network to transformer stations (3, 10). Diesel generators placed in generating stations (12, 23) enabled own power in case of failure. Boiler rooms (24, 11) supplied buildings with heat.